Webinar | The U.S. Turns a Blind Eye to the Plight of Christians in India
Persecution in China Press Releases Save The Persecuted Christians

STPC Panel of Experts to Discuss how China’s Aggression Towards Taiwan Threatens Christians in a Webinar Thursday, September 15 at 4:30 pm ET

WASHINGTON, D.C.—Taiwan’s Christians have long enjoyed the fruits of democracy and a government that is tolerant of various religious beliefs including Christianity. In fact, though Christians make up only 4% of the population, several of Taiwan’s presidents have been Christian. For decades, Taiwan has been a source of support for Christians fleeing the Chinese mainland due to horrific abuse and suppression.

Last month, Chinese diplomat Lu Shaye said when China takes Taiwan, re-education will follow. One only needs to study the plight of Uyghurs of Xinjiang to understand the threat. China is busy subjecting the Uyghurs and other ethnic minorities to genocide and massive, statewide, 24-hour surveillance. Effectively, the entire region is enslaved and slated for extermination. An estimated 3 million Uyghurs have been subjected to forced labor and re-education in centers that many refer to as modern day concentration camps. Their children have been stripped from them and placed in state-run orphanages where they are fed Communist propaganda non-stop.

Frank J. Gaffney, a former top Pentagon official in the Reagan administration and president and CEO of Save the Persecuted Christians (STPC), told The Washington Times that because the Chinese only permit a rewritten religion that venerates current President Xi Jinping, traditional Christians in Taiwan would be specifically targeted.

“It’s going to be a special level of horror or persecution or privation that will be inflicted upon the people of Taiwan who happen to believe in Jesus Christ,” said Gaffney. He predicted Chinese communists would “enslave” the population of Taiwan if a takeover occurred.

HOW: Register to attend at SaveThePersecutedChristians.org 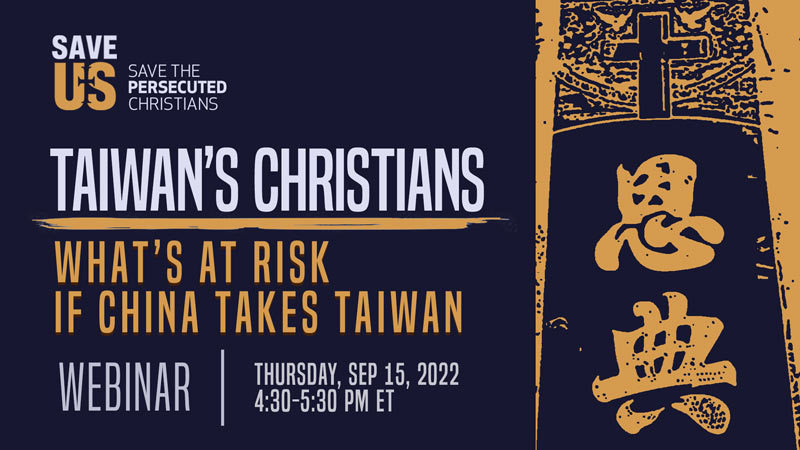