Fighting for Freedom in Iran

WASHINGTON, D.C. — Mahsa Amini, 22, was beaten to death last month in Iran while in the custody of the “morality” police for wearing an improper head covering. She was killed for having too much hair showing from under her scarf.

Amini’s death sparked mass anti-government protests, the largest since 2009, led mostly by young women in more than 100 cities and towns and even at Evin Prison, the death and torture chamber for political dissidents, which was allegedly set on fire last week by protestors within its walls.

“Support the brave because they fight for their families, communities, and the oppressed,” said Charmaine Hedding, president of The Shai Fund in a Facebook post. “Niloofar Hamedi, a woman journalist, dared to break the news to the world of the death of Mahsa Amini. For reporting on the violence and brutality toward women, she was incarcerated in the notorious Evin Prison.”

Hamedi broke news of Amini’s death on Twitter on September 16 when she posted a photo of the 22-year-old’s parents hugging each other in a Tehran hospital where their daughter was lying in a coma.

After 43 years of brutal oppression, the people of Iran say, “Enough is enough!” Chanting “Death to Khomeini,” these brave women — and the men standing with them — demand an end to the Islamic regime in power since the 1979 Islamic Revolution.

“This is a moment of incredible courage on the part of Iran’s young women,” said Dede Laugesen, executive director for Save the Persecuted Christians (STPC). “One would think women everywhere would take up their cause to stand with them in solidarity. Instead, politicians, the media, and Western feminists have mostly ignored the protests.”

Join STPC on Thursday, October 20, at 4:30 pm ET for the next Save the Persecuted Christians webinar, “Fighting for Freedom in Iran,” to examine the protests, the women of Iran, religious oppression, and the world’s anemic response with a panel of human rights activists and experts.

WHAT: STPC Webinar | Fighting for Freedom in Iran

HOW: Register to attend at SaveThePersecutedChristians.org 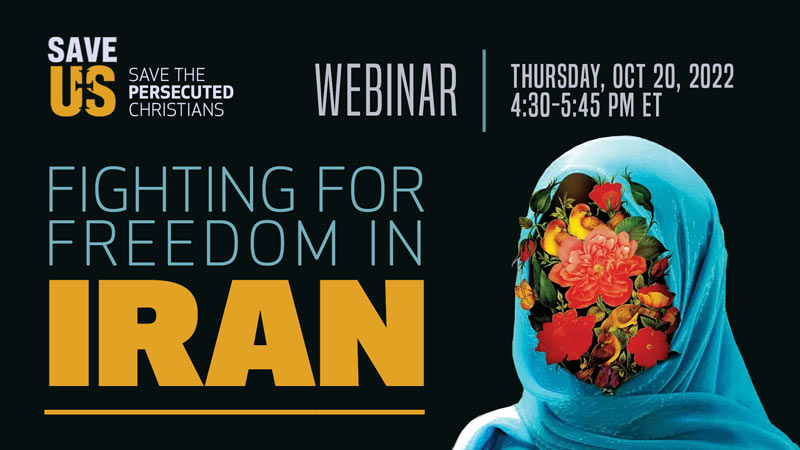